Most people have already seen GLSL in action in several Minecraft mods, ranging from bump- and parallax mapping to bending the world into one giant acid trip. Other games, such as Mythruna, use it out of the box for effects like HDR bloom.

Personally, I prefer Hexahedra's current look, with the simple textures and the blocky lighting. But there are several other interesting things possible that have nothing to do with aesthetics.

One of them is the use of texture arrays. An old technique to speed up rendering is to use a texture atlas: a large texture that combines several smaller ones. The drawback is that such textures cannot be tiled, so every cube has to be drawn separately. Minecraft uses (used?) a texture atlas that is exactly one tile wide, so the textures can at least be tiled horizontally. Strips of cube faces can be merged together, which cuts back on the amount of work the GPU needs to do. 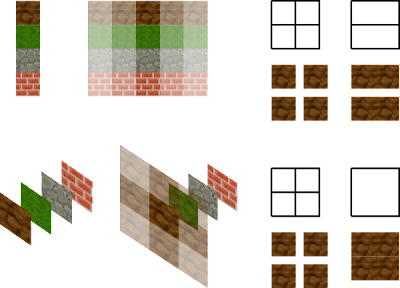 A texture array is a kind of 3-D texture. The individual textures are arranged in a stack. Each slice can now be tiled both horizontally and vertically, so we can merge even more faces. The gains are the most obvious for open water, where 256 cubes with the same texture and lighting can be merged into a single, large square.

And in one fell swoop, it also solves all problems with textures bleeding into each other at the edges because of mipmapping and rounding errors.

There's another advantage. Every corner used to be stored as three shorts (x, y, z) for the position, two floats (u, v) for the coordinates in the texture atlas, and three bytes (r, g, b) for the lighting. That's 68 bytes per face.

Such restrictions no longer exist in GLSL. We can put the coordinates in bytes. (I'd put them in nibbles, but the range is 0-16, not 0-15). Now that we're using texture arrays, we need a short to pick a slice, and two nibbles for the u,v coordinates. Three more nibbles for the lighting: ambient, sunlight, and artificial light. The actual light colors are grabbed from uniforms, global values we need to set only once. So we're down to 32 bytes per face. Nice!

Hmm... The u,v coordinates now move in lockstep with the vertex positions. It turns out that by storing a normal, we can go from world coordinates to texture coordinates by a simple multiplication. We only have six possible normals, so that's three bits. And we're down to 28 bytes per face. Even better, we can now use the normals for the ambient lighting as well. Dusk and dawn are going to look spectacular if we can give the west (c.q. east) faces a red or pink hue.

I look at the top of the screen where it says "20 FPS". Frown. Revert to previous shaders. 60 FPS. The fuck?

Turns out a simple lookup in a table with six 2x3 matrices is painfully slow in GLSL. It might not be worth the extra 4 bytes per face, but it would be neat to have anisotropic ambient light. Perhaps a lookup in a small 1D texture would solve this? I'll have to spend some more time on this.